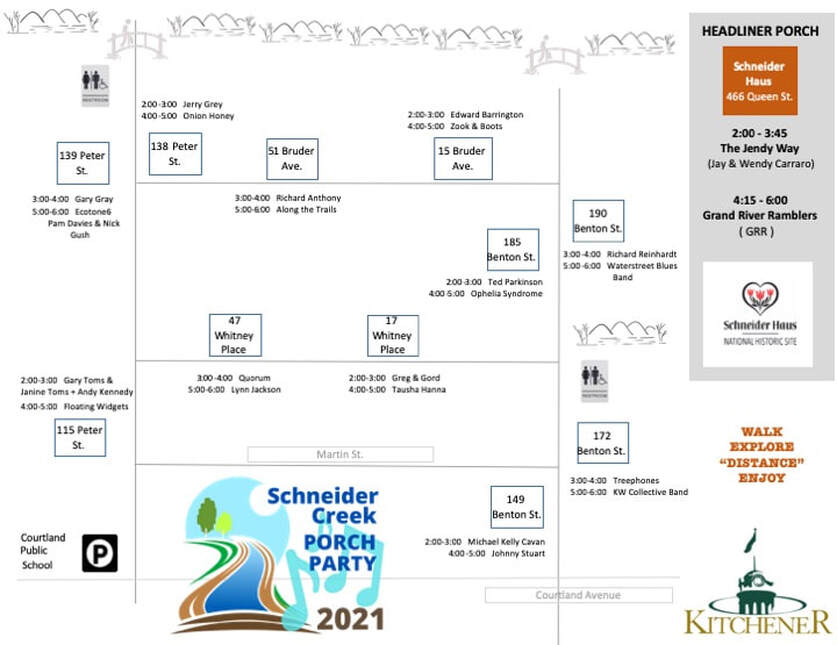 loating Widgets
Co-Founding Widget and multi instrumentalist Kevin Grossi will be playing with Les Starkey joined by Whistle player James Stockton and of course renowned Irish performer and vocalist Brian Crozier - FLOATING WIDGETS - Live at 115 Peter St. 4 - 5 p.m.
​Floating Widget has been on the Irish Trad scene since the late 90s. Les Starkey is one of the founding members of Floating Widgets and has been sharing his passion for the Irish drum for over 33 years. Les and penny whistle expert Egan Baird who is experienced in the Trad scene in SW Ontario as well as the East Coast and Ireland will be joined by well known local Irish Singer Brian Crozier. An amazing combination of Irish Tradition!

Gary Gray
​Gary Gray, singer and song writer, has been entertaining people since he was 17 years old. He has played his music in various bars, clubs, hotels and festivals for over 40 years, entertaining young and old with his smooth and pleasing voice. He has written several of his own songs and created 2 CDs which have both sold out.
For over 23 years Gary has been featured at the St. George Applefest. He has also had the opportunity to open for Fred Eaglesmith and Garnet Rogers with whom he also played.
You can sample Gary’s latest CD, “Sweet Monarch”, on Spotify, YouTube and various streaming sites. This will be Gary’s first porch party and he is excited to play once again and is hoping to see some new and familiar faces. Sit back and enjoy the music! See you there.


Jerry Grey
An unbelievable musician and damn fine guy. Jerry Grey is an underground band man and soloist with his 2nd album just about to come out. Grey will entertain you for hours and hours (if you let him : )

Her 9th album, Follow that Fire (2017), produced by Michael Timmins (Cowboy Junkies) on Busted Flat Records has been well received across North America, the UK and Europe. After releasing her 10th album with side-project, Shipwreck Radios, Lynn will release her 11th album in 2019. Details to come !

Onion Honey has been heard on radio stations across Canada and both Raisin’ Heck and Earthly Trials charted on national campus radio. They perform regularly around Southwestern Ontario at festivals and fairs, parties and weddings, saloons and cafes, galleries and libraries, and pretty much everywhere else.
https://onionhoney.com/onion-honey​

Ophelia Syndrome
Ophelia Syndrome are a collective of weirdoes who make noise together. They try to blend various keyed instruments, cello, bass, drums, guitar, vocals, and whatever else they can find to hit, pluck, strum or occasionally blow. The result is their own unique blend of “indie” music, a term they are fairly certain has become ambiguous enough to encompass their indistinguishable classical, jazz, folk, roots, funk, soul, r&b, classic and contemporary rock influences. Yeah thats right, they like music, listen to it, and unintentionally steal whatever they can get away with, since by now everything’s been done by someone else anyway… you’ll just have to decide for yourself what they actually sound like because you won’t read it here.

Based out of numerous Southern Ontario basements, garages and attics, the band has actively existed in one iteration or another since the dawn of time it seems. After recording an EP “Shades of Grey” and their debut album “All Things Forgotten” at Catherine North Studios, a stunning converted cathedral space, the band decided to return to their natural habitat to try and achieve a truly honest, cathartic, and performance-based vibe for their last full length  fan-funded release: “North Sea." “From the basement.” is the latest release from Ophelia Syndrome, which is a collection of previously unreleased tracks, B-sides, and videos, which have been digitally re-mastered. Along for the ride are several rarities and oddities accompanying the EP. Listen and Enjoy? That's all folks!
https://opheliasyndrome.com
https://www.facebook.com/opheliasyndromeband/
ttps://twitter.com/opheliasyndrome
https://www.instagram.com/ophelia.syndrome/

Ted Parkinson
Ted Parkinson has been writing songs for over 35 years. His music is eclectic, melodic and quirky. He writes about springtime in February, Mormons, Bob Marley and neighbourhood Bingo halls. Ted is a member of SOCAN and the Songwriters Association of Canada.
Ted has played at many porch parties and coffee houses over the years. In 2015 he released his first album "My Neighbourhood" recorded at Fred Smith studios. It is available on iTunes (and at all of his gigs). Come and sing along!.
www.tedparkinson.com


Quorum
Barb & Peter Beacham
Quorum initially formed in 1971 in Montreal, with Peter as the bass player. Conceived as a large musical collective, the name was chosen to reflect the idea that only the members necessary for the performance of a particular song would be on stage for that song. By 1974, the collective was much smaller, and Peter had switched to guitar, but the idea that the size of the band on stage would vary according to the needs of the song had remained. Peter met Barbara in 1992, and quickly formed a musical partnership. After moving to Cambridge in 2008, Barb and Peter began performing at open mics, and cultivating new musical friendships. Having hit on the idea of a musical trio, or sometimes a quartet, with only two permanent members, Barb and Peter began to draw on their large group of musical friends to expand their lineup on a per gig basis.

​The name Quorum seemed appropriate for this band of varying size and they began using it with the permission of the surviving members of the original band. Though Barb and Peter still perform some original material from Roderick Noble, Quorum’s principal songwriter, their material consists mostly of an eclectic collection of covers, drawn from such artists as Crosby, Stills and Nash, Melissa Etheridge, Jackson Browne, Paul Simon, Colin James and Pink Floyd. As a duo, they feature Barb’s warm and buttery vocals as a lead singer and Barb's spontaneous harmonies to Peter's rich deep vocals. Quorum is often asked to perform for local charity events and enjoys sharing music interaction with their community.
Quorum fb page.
https://www.facebook.com/Quorum1971


Richard Reinhardt
Hello neighbours, I'm that busker.
That guy who PLAYS music at the downtown Kitchener Market every Saturday, and all around town when and where ever I can.  I began learning music here when I was eight and I'm still loving/learning every day.

I can't help it. I'm sure that PLAYING with others has been one of the good reasons I'm a happy healthy old guy. This is what I can share, and give. What I receive in return sustains me... Come to the Schneider Creek Porch Party.  It is all about sharing...


Johnny (Legkicks) Stuart
My name is John Stuart. I write/sing and do a mean live performance. I am a husband and father. I love life. I feel the need to explore it to the fullest. In between anthems I like the sounds of melodies and thunderous beats. Breaking my back till the blood stops flowing. Singing the chorus's the way I damn well want to!  Let's all rock together!
https://soundcloud.com/johnny-cat-stuart

TAUSHA
​Tausha is an alt-pop singer, songwriter, and producer from Kitchener, Ontario. Her music is filled with buzzy synths, piano melodies and hypnotic bass lines. Her performance at the Schneider Creek Porch Party will be a unique acoustic set. You can usually find her in her home studio working away on her next song, or out grabbing food with friends. As well as her solo career, she sings jazz classics with The Frank Adriano Quartet at festivals such as the World of Jazz Festival (Brampton, ON), and the Orangeville Blues and Jazz Festival. To learn more head to her Instagram @taushahanna.

​​
Gary Toms
Gary Toms is a reggae-blues artist who puts 60s and 70s classics through their paces. He covers a wide range of obscure and not so obscure songs ranging from bands like The Kinks to Taj Mahal.
His intensity shows a true love for the music. Hitting the stage this spring in Costa Rica, he’s ready to take his music to the streets- scratch that- porches.


Janine Toms
The finest ukulele songstress in all of Kitchener-Waterloo; sharing the set with her dad Gary Toms, Janine will croon some mighty fine tunes at 115 Peter St. from 2:00 - 3:00.


Treephones    -     Stephen Trothen
Treephones is the musical moniker of Waterloo's Stephen Trothen, who just released the second Treephones album "Pink Objects" this past May. The album was written and recorded at home by Trothen who also handled all but a few of the performing duties. The album weaves beautifully evolving textures into a carefully arranged and multi-layered swirl of sound throughout. As a concept album, each song is also set around or involving a particular object with story-based and direct lyrics.

​Zook & Boots
​Zook & Boots are Christen Latham and Simon Lewis, a singer-songwriting duo from the Kitchener-Waterloo area who play original songs and a selection of covers. They are best known for their harmonious melodies and their fun filled live shows. After working together for only a short time, Z&Bs have played many venues across southern Ontario as well as many charity  and private events.